Accounting for Variability in Vascular Models 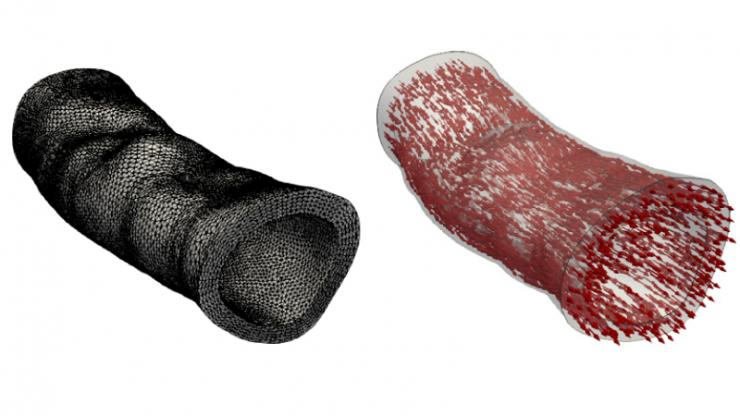 These arterial models were created from a patient-specific scan. The model on the left is the fundamental

Scientists at Duke University are working to accurately model the uncertainties in the mechanical behavior of human arterial walls. By supporting theoretical developments for tissue engineering, the research could eventually underpin patient-specific simulations to help physicians develop non-invasive techniques for early diagnosis and identify potential pitfalls before performing medical procedures.

The work has garnered international attention, with Brian Staber, a former PhD student of Johann Guilleminot, assistant professor of civil and environmental engineering at Duke, winning two awards for his thesis on the topic. In April 2019, Staber first won the Thesis Award from the France-based Computational Structural Mechanics Association. Five months later, Staber accepted the European Community on Computational Methods in Applied Sciences (ECCOMAS) PhD Award, given for the best thesis presented in Europe in the field.

“There is great variability in the artificial tissues we engineer as well as within the human body,” said Guilleminot. “Engineered vascular vessels, for instance, typically present significant variability due to complex development conditions, and arterial walls are essentially biological, layered composite materials that have different structural properties depending on, for example, the gender, age or activity level of their owner.”

“We’re trying to create digital twins that accurately account for these variabilities and efficiently predict how they will mitigate and propagate to quantities of interest,” he added. “Understanding how these two parts will interface to one another and work under extreme conditions within a vascular construct represents a daunting challenge”.

The trick is to create computational models that can be used to explore virtual scenarios in some optimal way.

“We’re combining mathematical models with advanced simulation techniques to create a range of scenarios of how a graft is going to perform, based on that variability,” said Guilleminot. “And we’re trying to do so by defining the coefficients in the governing equations in a way that reflects physical reality for groups of patients.” 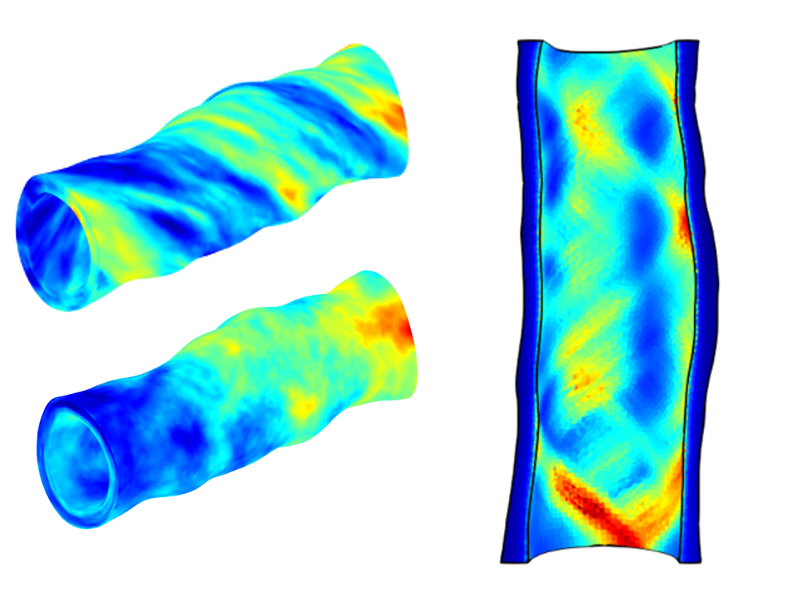 The models developed in Guilleminot’s group are attempting to recreate how a variety of mechanical properties at one point affect those same properties at neighboring points—and on down the line throughout the entire structure. And to make matters more complicated, those structures are curving, slightly bumpy volumes that look like a kindergartener’s attempt at a clay sculpture.

The developed algorithms model the intricacies of these irregular shapes while allowing users to adjust how much each point’s physical properties affects its neighbors in each dimension independently. By tweaking the strength of these dimensional correlations and the induced deformations’ effects, they can match experimental measurements in some statistical sense.

The researchers are currently in the process of seeing just how well their models work. By comparing their models’ results with those obtained from physical experiments, Guilleminot and his group at Duke hope to demonstrate that their models and algorithms are accounting for all those complications well enough to accurately predict the mechanical reliability of vascular grafts.

This work is supported in part by the National Science Foundation (CMMI-1726403).