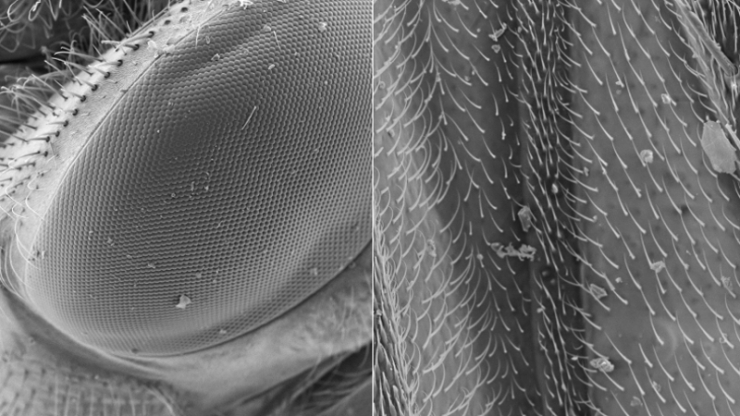 Holly Leddy has an unexpected visitor living in her home’s guest bedroom for the foreseeable future. But she doesn’t mind. Her guest is quiet, doesn’t consume much of anything and is helping her fulfill her organization’s outreach mission.

“The idea sort of started as a joke, like, ‘What if I brought an electron microscope home? Ha ha ha,’” said Leddy, an electron microscope specialist on the SMIF staff. “But when we really started thinking about it, we realized that it wasn’t actually a bad idea at all. With so much research grinding to a halt, it would be a perfect time to focus on outreach.”

Leddy is a member of the Research Triangle Nanotechnology Network—a collaboration between Duke, North Carolina State University and the University of North Carolina at Chapel Hill, that offers unprecedented access to nanotechnology facilities in the Research Triangle area for researchers from across the nation. Each school is home to expensive machines that researchers and companies from most anywhere can access to pursue their high-tech nanoscale ambitions.

The laboratory network also has an outreach mission funded by the National Science Foundation, which usually involves efforts such as providing K-12 educators with lesson plans, hosting field trips in their facilities and sometimes even bringing some of their equipment physically into local classrooms.

But with students stuck at home across the nation for at least the next month, their normal avenues for outreach dried up.

So when Leddy and her colleagues quickly became serious about her joke, Leddy moved the SMIF’s portable scanning electron microscope into her home, and “Take-Out Science” was born. 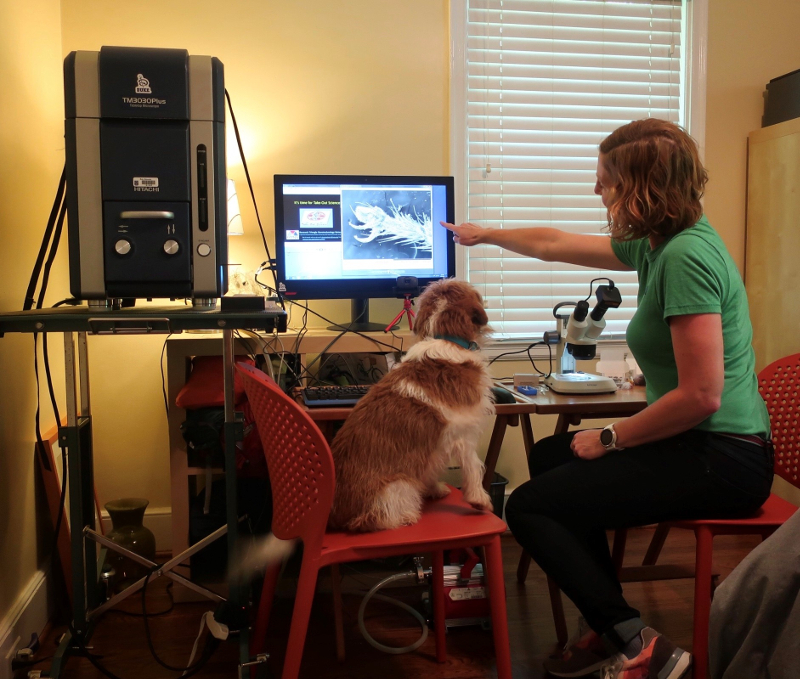 “The microscope was designed and purchased with the intent of being portable. We’ve taken it to classrooms and libraries to give demonstrations,” said Leddy. “But that doesn’t mean it’s easy to move. It’s big and heavy. It fills the entire back of a small SUV. And getting it into the house was difficult. I would ideally have it upstairs in my office, but there was no way I was getting it all the way up there, so it’s living in my guest bedroom on the first floor instead.”

Once the scanning electron microscope was up and running—which basically requires simply plugging everything in where it’s supposed to go and turning it on—Leddy began using it. Together with her colleagues at NC State’s Analytical Instrumentation Facility, Maude Cuchiara, RTNN associate director, and Phillip Strader, RTNN project scientist, Leddy is hosting weekly explorations of the microscopic world around us.

Every Tuesday at noon (ET) the team streams a live 30-minute show focused on a different theme. Leddy leads an exploration of each topic using a light microscope, a scanning electron microscope and her expert colleagues. All shows are designed with K-12 audiences in mind—although adults have found them fascinating too.

“Holly did a great job that first week. She introduced the microscope and didn’t delve too much into technical details at any one time,” said Cuchiara. “We’re aiming for a broad audience and introducing the mechanics slowly over time. The most interesting part for kids is seeing what we can view on the electron microscope and comparing it to a light microscope, because that’s something most students can relate to.”

The first episode, which live-streamed on March 31, explored the intricate, miniscule details of a common housefly. A week later, the second episode focused on a topic that is near and dear to every North Carolinian’s heart these days—pollen. Besides getting a brand-new look at these everyday items, viewers are encouraged to participate, ask questions and suggest topics for future shows.

“So far the most fun suggestions have probably been toilet paper and tiger hair,” said Leddy with a laugh. “Our viewers are nothing if not up to date on current events.” 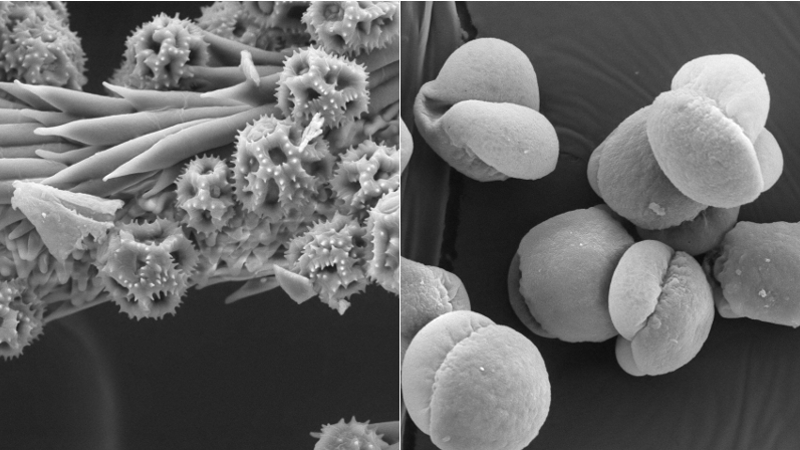 Each week, the program posts an SEM image of the next episode’s theme, and viewers are invited to guess the mystery topic via email (rtnanonetwork@ncsu.edu), on Twitter (@RTNNsocial) on Facebook, or in the comments section of the show’s page (https://www.rtnn.ncsu.edu/science-take-out/). The team picks one of the correct respondents to highlight during the show. Viewers are also encouraged to share fun facts, home photographs or pictures they drew through these channels, some of which are featured during the show.

During each broadcast, the audience can ask questions live via Twitter or by commenting on the show’s website. They can also email the show’s team during (or after) the live stream by including “Take-Out Science” in the subject line.

While Leddy is the face of the show—she’s the only one with a scanning electron microscope in her house—Cuchiara, Strader and others are hard at work behind the scenes planning episode content and responding to viewers’ questions and comments.

“We’re kind of winging it right now, since none of us are experts in producing internet content,” said Strader. “The challenge is to figure out how to make this work. Our approach is to focus on content first, but also to encourage important interaction. We don’t want this to just be a worksheet.”

The team is reaching out through their networks of teachers, schools, science festivals, museums and more to try to reach as many people as they can. Their first broadcast had 94 live viewers and more than 400 views within the next few days. Those are pretty good numbers for having a short promotion window before the show launched, and the group hopes to grow them in the coming weeks and months, if not years.

“Once we’re back in the laboratory and it’s not just me in a bedroom, we could expand the format to include a lot more different instruments and others could host,” said Leddy. “It seems like it’s going to be a long time before kids are back in school, and a lot of summer sessions and camps are probably going to be closed.

If we can build our audience now, we think we should keep it going as long as we’re able to,” she said, “even after things return to normal.”