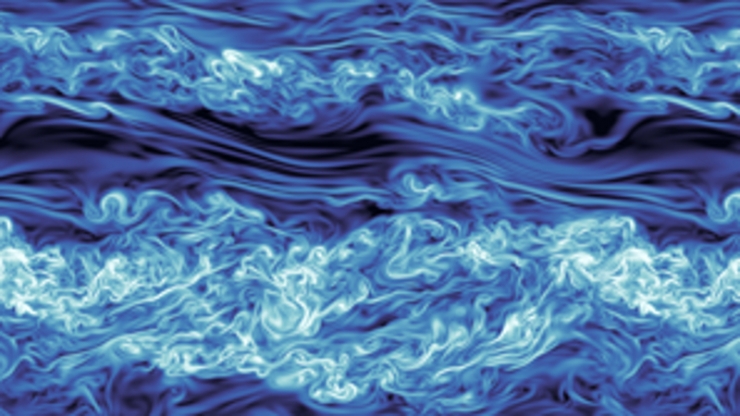 Andrew Bragg, assistant professor of civil and environmental engineering at Duke University, has been awarded a prestigious National Science Foundation Faculty Early Career Development (CAREER) Award. The award supports outstanding young faculty members in their efforts to build a successful research enterprise. For the next five years, the $500,000 award will support Bragg’s efforts to develop a new understanding of how turbulence behaves in fluids that are stratified and how it can be predicted. 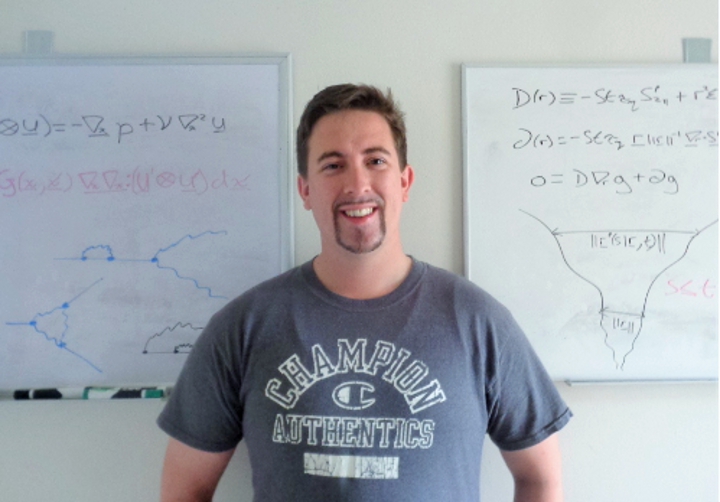 While fluids can flow in a variety of ways, turbulence describes the extremely complicated, chaotic motion that fluids frequently exhibit in natural and engineered systems. When a fluid's density increases on average with depth, the fluid is said to be stably stratified. This stratification, or layering, dramatically modifies the kinds of turbulent motion possible in the fluid.

For example, one visible effect of stable stratification on turbulent flows is that it can lead to the trapping of pollution in the lower atmosphere. Stratification also permits internal waves that propagate inside the fluid, which happens frequently in ocean waters but is more easily seen at the boundary between the oil and vinegar in a bottle of salad dressing that hasn’t been moved for a while.

“The competition between buoyancy forces and inertial forces vary from one region of the flow to another, leading to a complex and fascinating interplay that determines locally whether turbulence is produced or destroyed,” said Bragg. “This is a very hard problem, and so there is only so much theory and mathematical analysis that we can do before we start to hit a brick wall.”

“Environmental turbulent flows play vital roles in climate and weather forecasting, air pollution and control, the design of engineered lakes, and much more. This project will lay the foundation for my long-term goals of making transformative contributions to understanding and predicting the role of turbulence in the environment.” - Andrew Bragg

With the help of this new grant, however, Bragg will begin to chip away at this proverbial brick wall. The work will involve lots of theoretical and mathematical analysis, together with the development of simplified/approximate mathematical models. These will then be used in combination with large-scale numerical simulations of the problem.

The numerical simulations can solve the equations governing the problem exactly (in a numerical sense), but only provide data that then needs to be interpreted and explained, and this is where the theory comes in to help. Using a combination of theory and simulations provides a powerful approach for making advances in understanding and modeling this challenging problem.

The end goal is to provide transformative insights into the basic physics of stratified turbulent flows, including the role played by internal waves in generating and distorting turbulence, the mechanisms governing the exchange of kinetic and potential energy between different scales in the flow, and the processes that lead to extreme fluctuations. New predictive models will also be developed that work well for a wide variety of situations and can be coupled to large-scale models of atmospheric and oceanic flows to predict the behavior of turbulence at scales not resolved by such large-scale models. Finally, new models of particle transport within stratified turbulent flows will be developed and applied to predict the development of plankton blooms in lakes and oceans.

“Environmental turbulent flows play vital roles in climate and weather forecasting, air pollution and control, the design of engineered lakes, and much more,” said Bragg. “This project will lay the foundation for my long-term goals of making transformative contributions to understanding and predicting the role of turbulence in the environment.”

Beyond the laboratory, Bragg will also use the grant to create inventive and interactive displays to teach people about turbulence and complexity science by partnering with K-12 programs and science museums. Planned examples include interactive lessons “Fascinating Fluid Dynamics” and “Sights and Sounds of Turbulent Art,” as well as science projects for local children. The grant will also help develop lectures at local science museums, including “Turbulence in Art: From Da Vinci to Van Gogh,” which will use artistic depictions of the captivating behavior of turbulence, along with engaging audience activities, to introduce the processes that govern turbulence and other complex systems.