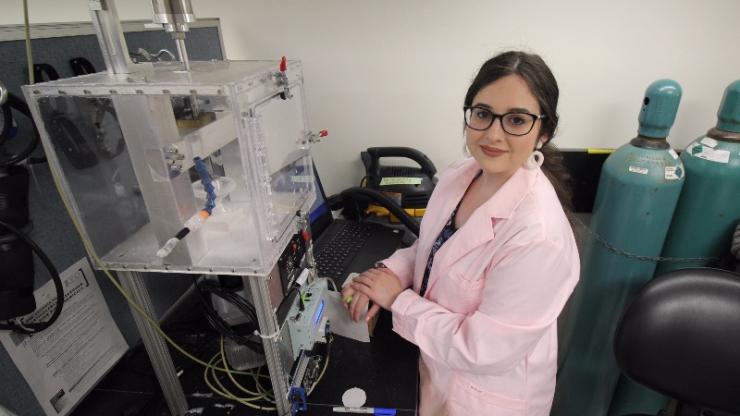 Imagine these three items on the table in front of you: a torn rain jacket, a leaky ballpoint pen and an empty sandwich bag.

Now imagine that instead of putting these items in the trash, you go outside, drop them on the ground, and leave them there. What would happen to these goods over time? Would the sun’s UV rays cause the pen to become brittle and crack apart? Would wind and rain accelerate the jacket’s deterioration? How long would it take for the bag to break down into fragments too tiny to gather up again?

Joana Sipe, a PhD student working in the lab of Civil and Environmental Engineering Professor Mark Wiesner, is exploring how common plastics break down. She focuses specifically on the effects of mechanical degradation, like how plastic that winds up in the environment is disintegrated by the forces of wind, sand and surf.

We’ve produced more than 18 trillion tons of plastic since the 1950s, and thrown most of it away. A startling amount has ended up in our waterways, rivers and oceans. Over time, Sipe said, pieces of primary plastic—everything from dental floss to candy wrappers—become tiny enough for animals to mistake them for bits of food. Eventually, those secondary plastics become so small that they disappear from sight, but not from existence.

“The US has the dirtiest water in the world, in terms of microplastic contamination,” said Sipe.  “There are nine plastic microparticles in every liter of water. We don’t know how that’s going to affect toxicity. The particles bioaccumulate, also, and we’re just beginning to understand those health effects. We don’t know exactly how much plastic we’ve put into the environment, and we don’t know how to clean it up. We’re in beginning awareness mode.”

"We don’t know exactly how much plastic we’ve put into the environment, and we don’t know how to clean it up. We’re in beginning awareness mode.”

Sipe doesn’t kid herself that we can quit our plastic habit cold turkey. But she is interested in developing recommendations for more informed plastics use, including choices that break down less in the environment. She started, therefore, by gathering data on six of the most commonly used plastics: nylon, polycarbonate, thermoplastic polyurethane, high impact polystyrene, polyethylene terephthalate glycol and polylactic acid. Sipe shaped each material into a “dog bone” and then pulled it apart to characterize its strength, before subjecting each material to constant abrasion in a machine designed to slowly grind away at it.

Her theory was pretty straightforward. “We thought, the stronger the plastic, the fewer microplastics it would generate,” said Sipe. “But we found that actually wasn’t the case.” There was no direct correlation between an individual measure of strength and resistance to wear; some plastics wore more much heavily under an 80 grit sandpaper than 100 grit, for instance, or broke down into larger particles than expected.

In the real world, Sipe said, projecting how the materials degrade is further complicated by the astounding number of plastic formulations humans have devised. There are countless sizes and shapes of plastic, and many compositions—they can be manufactured as spheres or tubes and then dyed and scented, or treated with additives to make them softer, harder or anti-microbial.

What she has been quite successful at, said Sipe, is mimicking the force generated by ordinary wear on specific plastic products—like chewing on a plastic pen, or dragging the soles of your tennis shoes along the sidewalk.

Sipe is considering the next steps that would make her experiment even more valuable. She thinks it would be particularly helpful to model shear stress generated by the force of an ocean wave in combination with the abrasive potential of different sediments, like gravel and sand.

“If we can correlate mechanical properties to breakdown, we can answer questions like, ‘If you threw a water bottle into the ocean, how many microplastic particles would it break into?’” said Sipe. “Eventually, we want to put this data into models that will be useful to policymakers and risk assessors.”

Sipe recently presented her findings at the Microplastics2018 conference in Ascona, Switzerland.