Class of 2023 A. James Clark Scholars Arrive at Duke 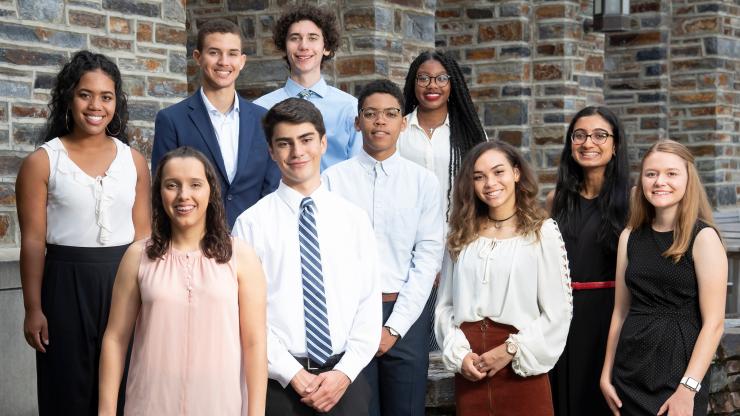 It was a week before orientation for all first-year students at Duke, and 10 new engineering students were in a campus conference room discussing what to do after being buried underground in an earthquake.

Marcus Ortiz, of El Paso, Texas, suggested a strategy: that the group first go through a list of potential actions and strike out those that they would surely not do. First on the reject list: lighting candles.

As Himani Bhat of Pfafftown, North Carolina, noted, at the start they had been told there might be natural gas leaks.

Of course, it wasn’t a real earthquake, but a tabletop scenario facilitated by David Pittman, Duke’s senior director of student life. The students were the newest A. James Clark Scholars at the Duke’s Pratt School of Engineering.

The goal of the earthquake simulation was less about what to do in a disaster and more about helping the students learn more about each other’s leadership and teamwork skills.

The session was just one part of a week-long pre-orientation program of workshops and small-group activities designed to help the scholars learn more about themselves, build resilience, and create the foundations of a supportive community among their group.

The A. James Clark Scholars Program, funded through a $15 million investment from the A. James & Alice B. Clark Foundation, expands access to Duke’s nationally-recognized engineering education and seeks to create a new generation of engineering leaders with a focus on engineering, business, leadership and community service.

Over four years, each scholar receives support to help offset loans, work-study, and summer earnings requirements. This support allows each scholar the freedom to participate in unpaid service, extracurricular activities, internships and the creation of their own venture.

A signature component of Duke Engineering’s initiative to encourage an entrepreneurial mindset among all its undergraduate students, the Clark Scholars program at Duke offers students personal mentoring, enrichment opportunities, and a focused summer program in entrepreneurship and management.

“Ten Clark Scholars are selected each year based on financial need, academic accomplishment, engagement in engineering and leadership skills,” said William F. Walker, director of the A. James Clark Scholars Program at Duke and the Mattson Family Director of Entrepreneurship at Duke Engineering. “We have an outstanding class once again this year, and I’m really looking forward to working with them throughout their time here at Duke.”

The incoming class—the second group of Clark Scholars at Duke—includes students from seven states with a wide range of achievements and aspirations, including inventing improved robotic prostheses, working in Silicon Valley and making an impact on global health.

The Class of 2023 Clark Scholars at Duke are: