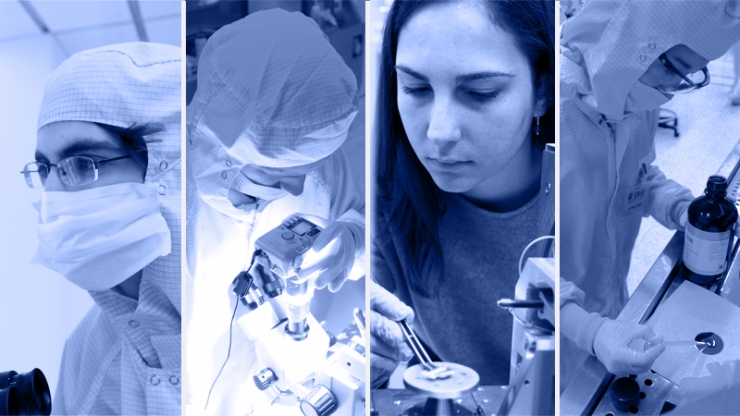 Through a unique grant program, Pratt School of Engineering undergraduates are getting their hands dirty—or, rather, keeping them extremely clean—in Duke’s advanced Shared Materials and Instrumentation Facility (SMIF).

Located in the Fitzpatrick Center at Duke University, the SMIF houses a cleanroom as well a wealth of specialized equipment for fabrication, characterization, and imaging of micro- and nanoscale objects.

The resources of SMIF are available to Duke faculty, outside researchers, entrepreneurs, and students through the Research Triangle Nanotechnology Network—making it a hub for groundbreaking research related to improving human health, developing new materials and more.

“Not many universities have an onsite cleanroom, much less the ability for undergrads to work in that cleanroom.”

Its innovative organizational structure pools resources, so that Duke nanoscience and materials researchers and the students who work with them can access more highly advanced equipment than they could obtain with just their own individual project funding.

All students taking the required electrical and computer engineering class ECE 230L are introduced to SMIF through class activities in the cleanroom, a special workspace with a highly filtered environment just like that used to manufacture computer chips.

But, through the SMIF Undergraduate User Program (SUUP) supported by the Lord Foundation, Duke students can apply for the opportunity to get a whole year’s worth of hands-on research experience through access to the extensive technological resources in SMIF.

Getting undergraduates into SMIF is a priority for Nan Jokerst, the executive director of SMIF and J. A. Jones Professor of Electrical and Computer Engineering at Pratt.

“When students are aware of this facility they can begin to imagine inventing or creating things at micro- and nanoscales,” she said. “They can imagine how they might use this in a research project with a faculty member.”

The SUUP supports an “idea to implementation” experience, where undergraduate students commit to participating in research with a faculty member. Interested students and their faculty sponsors submit research proposals, with projects selected based on the quality of ideas and the impact access to SMIF will have on their projects. Preference is given to multidisciplinary efforts.

Mark Walters, director of SMIF, said the Lord Foundation grant covers the facility fees for time the undergraduate students work in SMIF. Importantly, this removes an obstacle for faculty who want to involve undergrads in SMIF-based research. Over 50 students from the Pratt School of Engineering and across campus participated in the program this year.

“One of the benefits for undergrads is when they graduate from Duke, not only do they have a Duke education, they also have experience working in a lab like this,” Walters said. “It’s a real feather in their cap.” 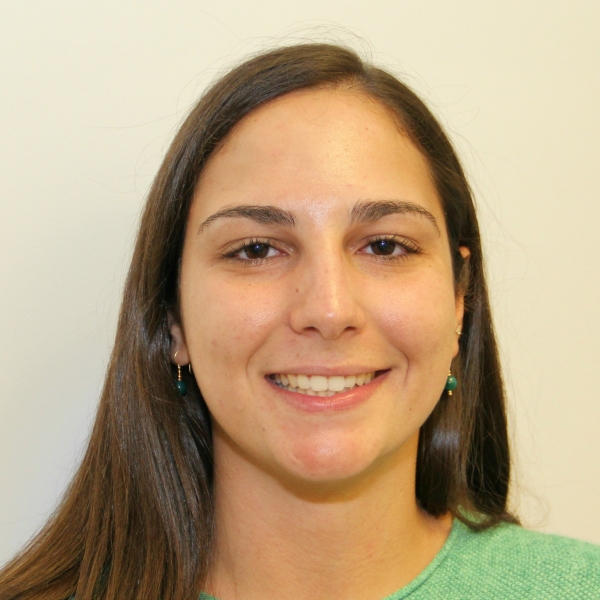 “We want to see how long these electrodes can survive in these wet conditions,” she said. “The longer, the better, so we can carry out long-term experiments with rats.”

Eventually, electrodes like these could be used in humans to predict epileptic seizures or control prosthetic limbs. To simulate brain conditions, Palopoli put the electrodes in saline and turned up the heat to about 60 celsius (140 degrees Fahrenheit). A month at that temperature is analogous to five months at body temperature. After electrode failure, she used the SEM to find out what happened to it. 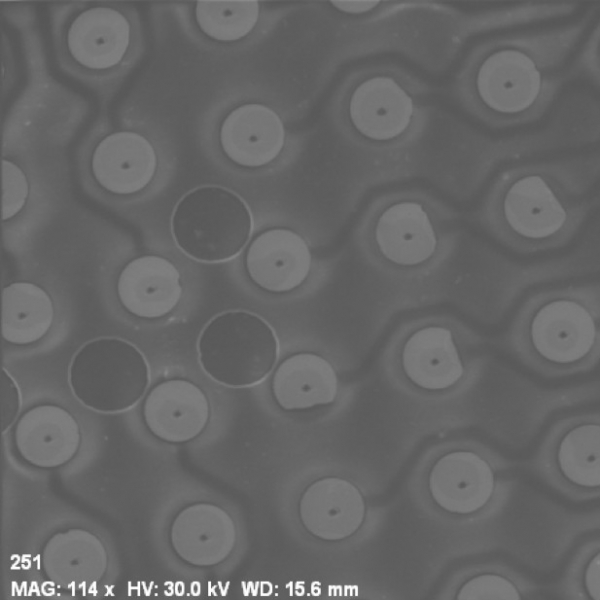 The electrode arrays she worked with were no bigger than 5 millimeters by 5 millimeters – not quite a fifth of an inch square. In that area, there are 61 individual contacts. She used the SEM to get extremely high-resolution images before and after the testing.

“We’re trying to figure out the failure point,” she said. “Did the contacts peel off? Did the gold corrode away?”

Working with the SEM gave Palopoli a skill that will come in handy in graduate school. What’s more, the independence and trust the SMIF staff placed in her gave her confidence as a young researcher.

“They train you and then let you use the equipment on your own,” she said. “It’s been really valuable to be able to carry out every portion of the project on my own.”

Zach Brown is using SMIF’s cleanroom to design a drug delivery system consisting of an array of tiny biodegradable needles. 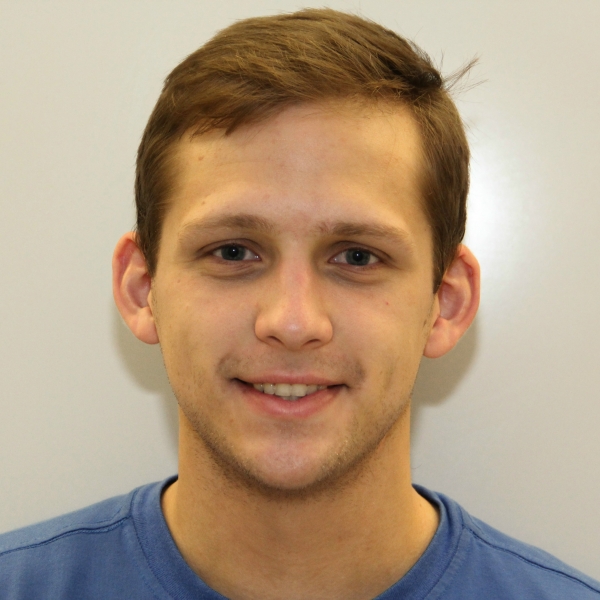 The microneedles penetrate the outer layer of skin, releasing a peptide (a small protein) as they degrade. The peptide activates the body’s mast cells, which signal immune cells to convene and attack a skin infection.

The notion of using this peptide as an alternative to antibiotics originated in the lab of Soman Abraham, a professor of pathology in the Duke University School of Medicine.

“Our quandary was how to deliver the peptides into the skin,” Abraham said. “That was the task Zach had.”

Microneedles are being used in other applications, but Brown had to come up with a new design for this purpose. 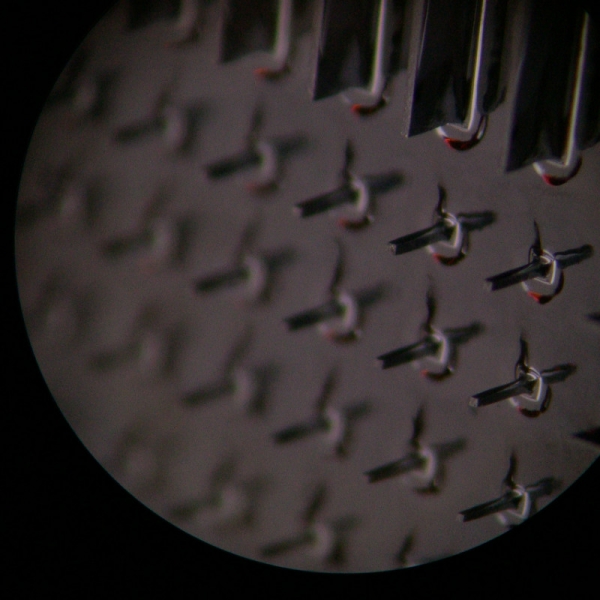 A senior biomedical engineering (BME) major, Brown approached BME professor Fan Yuan for advice, and also met with SMIF staffers Jay Dalton and Talmage Tyler, who talked him through different methods that might achieve what he wanted to do.

“We did deep literature searches on how to make structures of this size and geometry, and figured out a process for making them,” Brown said. He’s been testing the microneedles on mice and is continuing to refine the product.

“It’s been a great engineering education,” he said. “I’ve learned a lot of really cool technical skills.It’s reconfirmed to me I can figure out tough problems, given the resources and time and people to ask for help.”

Another benefit of Zach’s work has been the blossoming of a collaboration between Abraham, an immunologist, and Yuan, a biomedical engineer.

“Zach is the one who actually brought us together,” Abraham said.  “I’m really happy about that.” 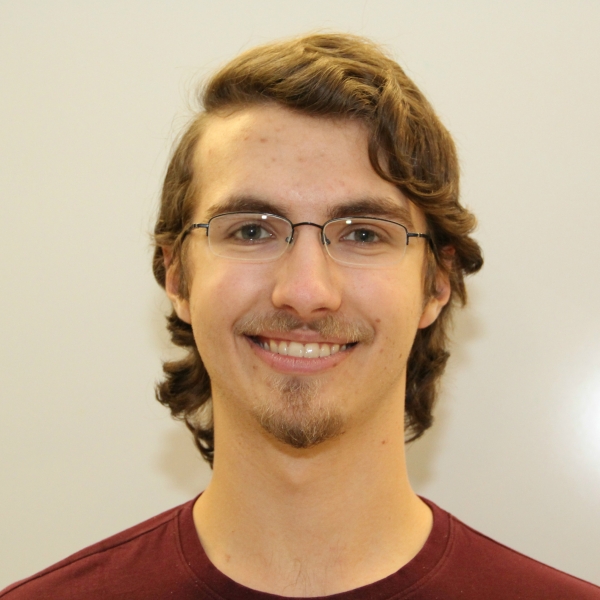 The 25-by-75 millimeter chips (about 1 inch by 3 inches) are etched with nearly 4,000 tiny compartments, each of which can hold a single cell. The idea is that researchers could observe the response of many individual cancer cells to a potential drug, for example.

“We use the cleanroom for the production of our chips because we’re working on such a small scale that any little piece of dust can cause part of the chip to clot,” Kelly said.

To make the channels and compartments on the chip, Kelly uses photolithography, which involves using light to engrave a pattern onto a silicon wafer. 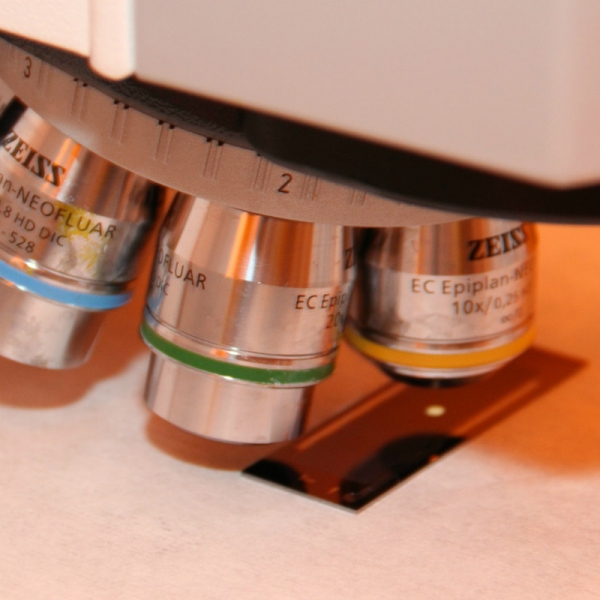 Making these chips is part of Kelly’s work in the lab of Benjamin Yellen, associate professor of mechanical engineering and materials science at Pratt. Lab members use piezoelectric devices to create standing waves in fluid-filled microchannels on the chip. Then they add cancer cells, which because of their acoustic properties are “pushed” by the waves toward individual compartments.

Kelly, who has another year of undergraduate student to complete, is considering continuing his study of mechanical engineering in graduate school. He expects his SMIF experience will serve him well there and beyond.

“Having that kind of experience makes you stand out a bit,” he said. “Not that many universities have an onsite cleanroom, much less the ability for undergrads to work in that cleanroom.”

Senior Ji Won Park works in the lab of Adam Wax, professor of biomedical engineering. Wax and members of his lab use spectroscopy and other imaging techniques to observe cells and tissues and detect cancerous and pre-cancerous lesions. 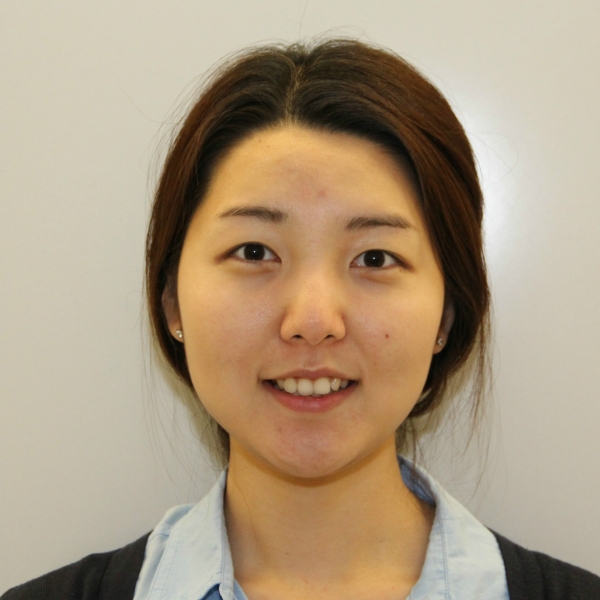 In SMIF’s cleanroom, she is working on a project with one of Wax’s graduate students, Han Sang Park.

Ji Won Park makes microchannels and attaches them to microscope slides. Using these slides and an instrument called a Quantitative Phase Microscope, it’s possible to observe how individual red blood cells squeeze into the channels.

“We can see what happens on a nanoscale,” she said. “It’ll give us a better sense of how blood cells respond to external forces.” This work could have implications for how blood is transfused during surgery, for example.

In a project of her own, she used SMIF’s scanning electron microscope while building an instrument called a white light interferometer. This project was a continuation of work she started while interning at SLAC National Accelerator Laboratory at Stanford University the previous summer. 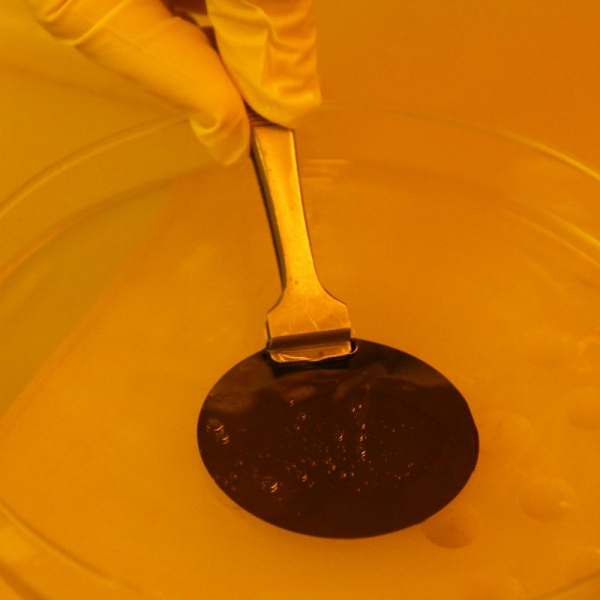 “The BME project gave me an exposure to hardware and instrumentation,” she said. “It can be frustrating not getting the results from multiple trials but it gave me the belief that if you sit on it for long enough, eventually you’ll figure it out. For me that was the most important lesson through the whole process.”