For their research into methods for improving the environment, two Pratt civil and environmental engineering graduate students were recently awarded EPA STAR fellowships.

The students, Matthew Strickland and Thomas Morse, will each receive support in finishing their degrees as well as funding for their respective research endeavors.

Matthew Strickland, a first-year student in the laboratory of professor Marc A. Deshusses, received one of the fellowships. His project involves the use of a biophasic reactor to degrade waste gases into safer compounds. The reactor setup involves bubbling a volatile organic compound such as toluene through a tube filled with water, bacteria, and an ionic liquid. The ionic liquid in the reactor should facilitate the bacteria’s dissolution of the waste gas by making it “bioavailable for degradation.” This means that the ionic liquid makes the waste gas and other contaminants more easily accessible by the bacteria, which can then more easily break down the contaminating substances into other less-dangerous compounds, such as carbon dioxide. 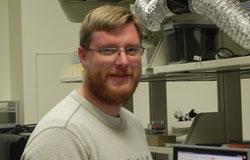 The end products from this process for methane and toluene are safer compounds than the original waste gasses, Strickland said. Accordingly, his process could be better than other methods of waste gas disposal because its eliminates dangerous waste gasses and contaminants in a safe and sustainable way.

Strickland notes that other case studies have successfully used silicone oil instead of ionic liquids to make methane bioavailable for this process. One of the goals of this project is determining whether ionic liquids can actually work in the same way as silicone oil. The benefit of using ionic liquids is that they have “no vapor pressure, and will not evaporate,” according to Strickland, and are therefore easier to refine and clean.

Strickland was inspired to pursue this line of research following a meeting with Deshusses as a part of applying to graduate school at Duke. Strickland said Deshusses’ research into “using things found in the environment to meet our needs” captured his interest, adding that “any industrial engineer can build a furnace [to simply burn off waste gasses, but it takes finesse to be able to use the natural environment to treat waste.”

Ultimately, Strickland hopes he will be able to use the bacteria to create useful products such as methanol from waste gasses. Such a product could be refined and sold, thus converting otherwise-harmful waste gasses into more useful forms in a sustainable way.

Thomas Morse, a first-year student in the laboratory of assistant professor Claudia Gunsch, received another of the fellowships for his project involving invasive species control in algae cultivation. Like Strickland, Morse also derives inspiration for his project from a desire to improve the environment. 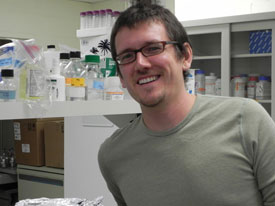 Morse’s project investigates the efficacy of antisense gene silencing to control microalgae growth and protect microalgal crop. Antisense gene silencing entails the use of artificially-constructed stands of DNA chosen to match the parts of the target cell’s DNA that code for proteins essential for cell processes. The DNA strands bind to complementary mRNA strands, inhibiting protein translation, and thus causing the target cell to die.

Since the initial proposal, Morse said his project has certainly “morphed a lot” in focus and concentration, with changes stemming from instances where certain theories — particularly in possible methods of DNA delivery — did not produce the desired results. Morse’s initial plan involved reliance on passive diffusion and methods such as heat shock or electroporation to facilitate the delivery of the constructed DNA into the targeted cells of invasive species.

These methods, however, were “not scalable,” as the DNA did not diffuse as well as expected into the cell and also proved to be extremely susceptible to degradation in the periplasm and cytoplasm of the cell. Using peptide nucleic acids instead of the sugar-phosphate-backboned DNA also proved to be impractical due to their considerable production cost.

Accordingly, Morse tried a method of DNA delivery with a lower cost and more efficient method of delivery: bacteriophages, isolated from activated sludge from the Durham  North and South Water Reclamation Plants. Bacteriophages are viruses that infect bacteria, injecting their genetic material into the target cells, hijacking cellular functions to produce more of the bacteriophage, and ultimately destroying the target cells. In this way, bacteriophages provide an efficient method of DNA delivery and targeted cell destruction, promising an effective method of invasive species control for Morse’s research.

Other applications of Morse’s research extend to controlling growth of biofilms, particularly in applications where a harsher method would be dangerous or impractical. Morse cited catheter cleaning in hospitals as an application where bacteriophage-facilitated pathogen control would be safer and more effective to use than conventional methods.