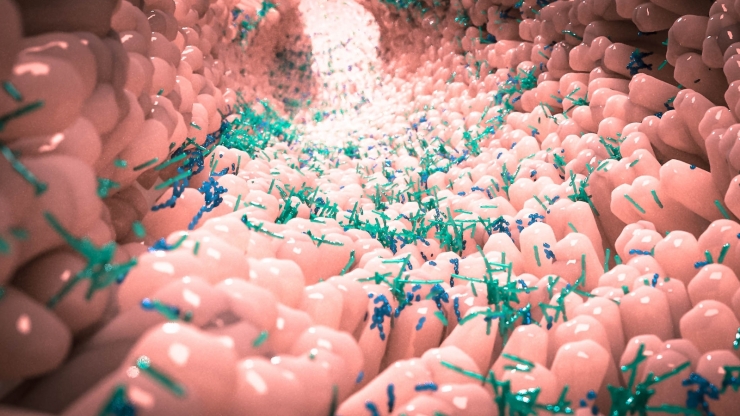 Researchers at Duke University have completed the most comprehensive study to date on how a class of persistent pollutants called semi-volatile organic compounds (SVOCs) are associated with the gut microbiome in human children.

The results show that certain SVOCs are correlated with the abundance of bacterial and fungal species living in the human digestive tract and may affect them differently, providing a potential mechanism for measuring exposure to a wide variety of these substances. The study also suggests that exposure to toxic halogenated compounds, chemicals containing carbon and a halogen such as chlorine and bromine, may create a niche for bacteria that feed off of them—bacteria that are not usually found in the human gut.

“We found bacteria that researchers use for soil bioremediation to remove chlorinated solvents, which is not an organism that you would expect to find in somebody’s gut,” said Claudia Gunsch, the Theodore Kennedy Professor of Civil and Environmental Engineering at Duke. “The reason it’s used in soils is to detoxify and remove chlorines, which suggests that maybe that’s also exactly why they’re in these guts.”

The results appear online on October 30 in the journal Environmental Science & Technology Letters.

“We want to understand the impacts of exposure to SVOCs on our gut microbiome and how that translates to positive or negative health outcomes,” Gunsch said. “But right now it’s a big black box that we don’t understand.”

SVOCs are a broad class of odorless chemicals that are emitted from building materials and consumer products, often slowly evaporating and settling on dust particles and water droplets. Almost everyone in the developed world is exposed regularly to at least some of these compounds, due to their common use in industrial and consumer products.

The thought that these chemicals might have effects on the human microbiome and impact health is relatively new, and the research to uncover what these may be and why they occur is still in its infancy. One important line of work is aimed at children because they typically have higher exposure rates, due to spending more time playing on dusty floors where SVOCs accumulate, and because their growing bodies are more susceptible to novel environmental stressors.

“We found bacteria that researchers use for soil bioremediation to remove chlorinated solvents, which is not an organism that you would expect to find in somebody’s gut." - Claudia Gunsch

One avenue for causing turbulence in a growing child’s life is through affecting the gut microbiome. Made up of the complex communities of bacteria and fungi growing and living together throughout the human digestive tract, the gut microbiome has been shown to have a clear importance to childhood development as well as adult health. While some studies have already shown that certain SVOCs have an impact on the gut microbiome of children, the chemicals studied are just a tiny fraction of those that people are exposed to.

“In theory, perturbations in the gut microbiome of children might be associated with long-term health impacts,” added Courtney Gardner, assistant professor of civil and environmental engineering at Washington State University, who conducted the study while still a member of Gunsch’s laboratory. “But before we can really study any of them for clear causations, we need to get a sense of which SVOC classes seem to be the most negatively associated with microbiome communities.”

In their first explorative foray into this field, Gunsch, Gardner and their colleagues at Duke measured the levels of dozens of SVOCs circulating in the bodies of almost 80 children between the ages of three and six. They also characterized each of the children’s gut microbiome and then looked for relationships between the differences they found and exposures to SVOCs.

There wasn’t any shortage of data to work with, as the researchers found 29 SVOC compounds in more than 95% of the samples taken. They also found relationships between the compounds present in children’s blood or urine and the relative amounts of key microbes, including 61 bacteria and 24 fungi. After working through the various biomarkers and relationships, the researchers came away with two interesting insights.

The first was that children with high levels of halogenated SVOCs have some unusual guests in their guts.

The researchers also found that while some SVOCs had a negative effect on bacteria in the gut microbiome, others had a positive effect. With more research into exactly how these various chemicals affect the different species of the gut in their own ways, this work may provide the possibility of using a snapshot of the gut’s microbial community as a window into what SVOCs a child has been exposed to.

“It’s currently really complicated and expensive to measure what chemicals people have been exposed to if you don’t already know what you’re looking for,” said Gunsch. “By contrast, this is pretty simple. If we could get a reliable snapshot of SVOC exposure just by sequencing a microbiome’s genetic signature, we could use that to help us understand more about the health impacts these chemicals have on our children and ourselves.”