A vernissage was held to unveil two permanent pieces of art that will adorn the CEE department’s office walls created by professors Tomasz Hueckel and Amilcare Porporato. 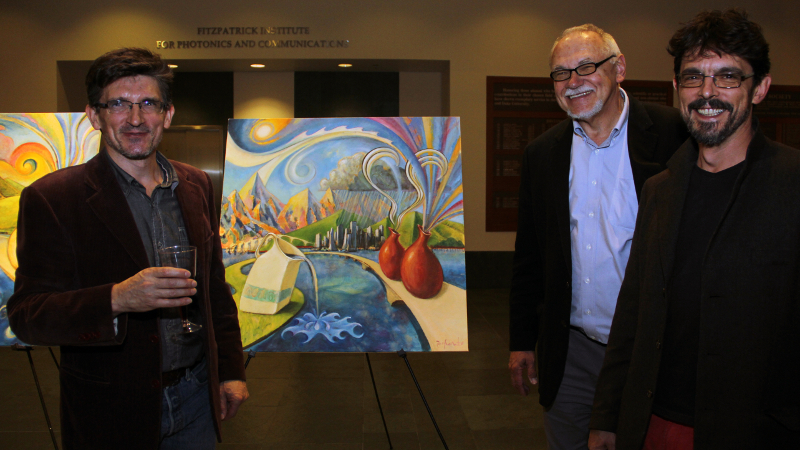 Students, faculty and staff from Duke’s Department of Civil and Environmental Engineering gathered recently to celebrate the artistic underpinnings of engineering. A vernissage was held on the evening of Tuesday, November 15, 2016, to unveil two permanent pieces of art that will adorn the CEE department’s office walls and celebrate the work of their creators, CEE professors Tomasz Hueckel and Amilcare Porporato.

“The underlying motivation for the event was to underscore the importance of art, the creative process, and aesthetics in the work of engineers,” said Wiesner. “Duke is a special place where we educate engineers to be more than technicians. Stressing the connection of the arts to our technical missions is becoming a growing tradition in Pratt that has been promoted by many of our faculty and students.”

Wiesner turned to Hueckel, who he knew regularly produced colorful pieces of cut sheet metal in his spare time. Hueckel, in turn, informed Wiesner that another professor, Porporato, was also an artist. The event was held to unveil their art in a small event featuring a department jam session for musical entertainment. Work from both artists will be on display in the CEE reception area.

Hueckel’s art features scenes cut from sheet metal and spray-painted with a rainbow of colors, most of which depict wildlife. It’s a labor-intensive process of using handheld cutters for the broad strokes and what amounts to a screwdriver and hammer for the interior spaces. The bigger pieces, such as the one now hanging in the CEE department, take up to three months.

“If I cut for more than an hour a day, my fingers would fall off,” remarked Hueckel, who displayed a couple dozen of his works during the event and began his craft in 2009. He added with a chuckle, “One day I will have enough for an exhibit and will sell each for $100,000.”

Porporato’s paintings come from a collaboration between him and his brother Luigi, who has long been the artist in the family. Within the past three or four years, the duo began working on paintings together whenever one would visit the other, quickly producing several works at a time.

In this showing, Porporato’s work depicts scenes that represent various pieces of the water cycle—a topic in line with Porporato’s research on hydrology.

“Here my brother and I try to show the laws of physics within our art,” said Porporato. “We really enjoy spending the time together and like to work fast, which is great because it stops us from getting into too many arguments about colors and shapes of what we are painting.”