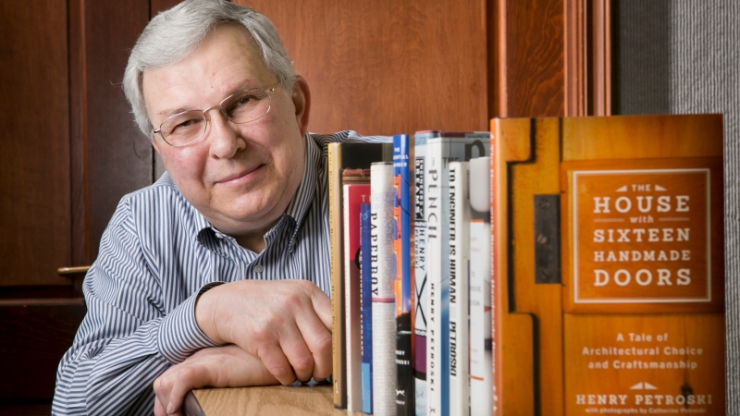 Henry Petroski, Aleksander S. Vesic Distinguished Professor Emeritus of Civil Engineering at Duke University, has been named a fellow of Sigma Xi, The Scientific Research Honor Society. Petroski joins 14 of his peers who comprise the 2021 cohort and was cited “For distinguished accomplishments and for engaging histories of bridges in the pages of American Scientist.”

Even as a graduate student at the University of Illinois at Urbana, Petroski pursued a passion for writing, entering a student paper competition sponsored by Sigma Xi and coming in third. As an engineer at Argonne National Laboratory working on problems relating to the development and operation of liquid-metal fast breeder reactors, he developed a broad interest in failure analysis and began to write about issues in technology and society for newspapers and magazines, including MIT Technology Review.

Petroski became an associate professor of civil engineering at Duke in 1980 and published his first book for the general reader, To Engineer Is Human, in 1985. In the following three and a half decades, Petroski authored nearly 20 popular and critically acclaimed books that have earned him the reputation as “America’s poet laureate of technology.” He also wrote regular columns for ASEE Prism magazine and American Scientist, the latter in which his “Engineering” column has run in every issue since 1990, totaling 188 in all.

“Throughout this time, I have had the pleasure of working with editors-in-chief Brian Hayes, Rosalind Reid, David Schoonmaker, Fenella Saunders, and the entire staff of the magazine,” Petroski said of his decades-long stint as a columnist for American Scientist. “I get great pleasure writing about bridges and other aspects of engineering design, and I thoroughly enjoy the feedback I receive from Sigma Xi members and readers of the magazine."

Rate of Change · Of Potholes and Budget Holes