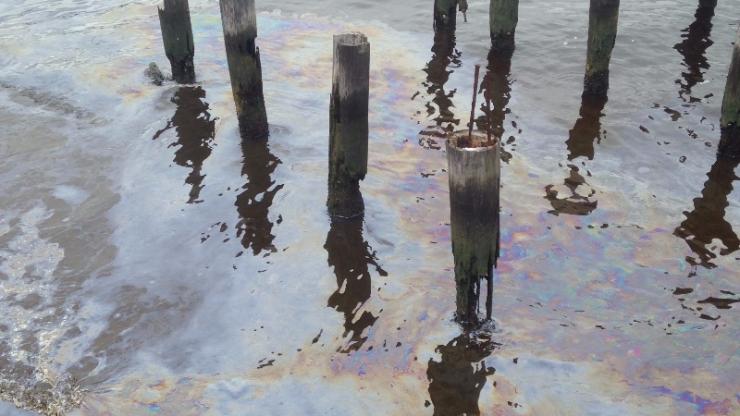 On a hot July morning in Virginia, I found myself suiting up in waders and a safety hard hat. This trip to one of our field sites was already different than any other. The summer sun had been blaring down on the river bank for a few hours, beckoning to the surface a sour concoction of aged creosote.

In the early 1600’s, the Elizabeth River—a tributary of the Chesapeake Bay in Virginia—was one of the first sights for many British colonizers including Captain John Smith. Named in honor of King James I’s eldest daughter, the Elizabeth River was an emblem of opportunity. Over the many years of settlement and industrialization, the Elizabeth River became one of the largest shipping channels in the United States, hosting many ports, a naval base, and manufacturers of various shippable commodities.

Creosote, a product formed through the chemical transformation of various tars and plant-derived materials, was primarily used as an effective wood preservative to coat telephone poles and railroad ties up until the late 1900’s.

In the twentieth century, three creosote manufacturing companies operated along the banks of the Elizabeth River. Creosote, a product formed through the chemical transformation of various tars and plant-derived materials, was primarily used as an effective wood preservative to coat telephone poles and railroad ties up until the late 1900’s. Over time, creosote manufacturing byproducts were released into the Elizabeth River and, because of their persistence, these compounds rest in the sediments to this day. The amount of creosote pollution found at these sites is some of the greatest in the world.

On the day of our visit to collect sediment from the Elizabeth River, the long-ago dumped creosote was making its presence known. I had never seen anything like it. It truly was a rainbow river. There was a huge sheen floating on the surface, hosting colors of pinks, oranges, and purples. When disturbed, this floating cloud morphed into crisp metallic colors.

The sediment under the water—my primary research interest—shone similarly. Using my gloved hands, I carefully loaded this smelly gold dirt into my collection tube for later analysis. Some of my colleagues also collected fish from the Elizabeth River.

The fish would be returned to our laboratories at Duke University where our research team analyzes the effects of chemical exposure on the fishes’ ability to function effectively. In the sediment, we would be looking for the smallest forms of life, or microorganisms, capable of surviving in the presence of heavy pollution. Microorganisms, such as bacteria and fungi, have adapted incredible metabolic systems and thrive in some of the harshest environments on Earth, including hot springs, deep ocean trenches, and the tundra. In the context of my project, I wanted to find organisms that could consume creosote and break it down into non-toxic by-products.

I wanted to find organisms that could consume creosote and break it down into non-toxic by-products.

Using microorganisms to remove chemical pollution from the environment is a treatment approach known as bioremediation. Bioremediation serves as a promising non-invasive alternative to typical sediment remediation strategies, which rely on dredging the river bottom and sending the sediment to a landfill or incinerator. In the case of the Elizabeth River, polluted sediment is relocated to an unsettled island—saving the problem for another day, in another place. However, if efficient microbes can be identified, a bioremediation strategy could be implemented and all the sediment could stay just where it is, preventing further damage to the local ecosystem.

The Elizabeth River is already home to a diverse community of microorganisms—bacteria and fungi that are working hard to maintain a functional ecosystem. As we better understand the dynamic nature of these microbial communities, we can learn how to help them consume creosote with greater efficiency and at a faster pace. Thankfully, the Elizabeth doesn’t always host such diverse colors and pungent smells. In the dead of winter, she seems just like any other river—cold, calm, and quiet. My hope is that my research will help rehabilitate the Elizabeth River and prevent it from ever being a rainbow river in the future!