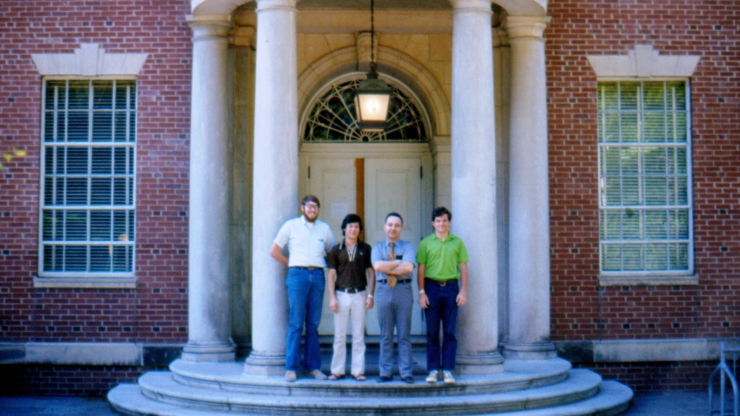 Senol Utku, a professor of civil engineering at Duke University for more than 30 years—whose forward-thinking research advanced the multi-faceted intersections of computers and structural systems, died on May 29. He was 90.

His death was announced by his son, Sinan Utku.

Faculty in the Duke Department of Civil & Environmental Engineering (CEE) recalled that Utku was a renowned and prolific researcher, as well as an inspirational mentor to younger faculty. Upon his retirement in 2002, Duke CEE faculty and staff honored Utku by naming a set of annual awards that recognizes the best peer-reviewed journal papers authored by the department's PhD students.

“The role of engineering education as a profession designed to improve humanity’s condition was thematic to Senol's professional life,” said Henri Gavin, the W.H. Gardner, Jr. Chair of Duke CEE. “He valued sharing the spark of new ideas, and prioritized student learning above everything.”

“He valued sharing the spark of new ideas, and prioritized student learning above everything.”

His work focused on solving problems related to pre-loaded structures, such as suspension bridges and spacecraft, and investigated new ways to design systems capable of enduring extreme environmental conditions such as high winds and strong earthquakes. As computing power expanded rapidly in the 1970s and 1980s, Utku was among the first researchers to imagine how multiple computers could be harnessed to solve complex engineering problems.

Utku was a leading thinker on the topic of computer-based feedback systems for adaptive structures—complex constructions which can adapt their behavior to changing conditions, such as a large parabolic antenna that can alter its shape to counter strong winds and thereby maintain performance.

His landmark 1998 book Theory of Adaptive Structures: Incorporating Intelligence into Engineered Products, discussed in detail how increasingly sophisticated sensors, actuators and microprocessors might be applied to control structural systems.

Utku, a native of Turkey, graduated from Istanbul Technical University in 1954. He earned a Doctor of Science (Sc.D.) from the Massachusetts Institute of Technology in 1960.

After assignments with Middle East Technical University and Istanbul Technical University, he returned to the United States in 1965 as a senior research engineer with the Jet Propulsion Laboratory. He joined Duke in 1970. By 1979, he was a full professor in the then-Department of Civil Engineering, with a secondary faculty appointment in Computer Science.

Lee Shoemaker was one of Utku’s students. After completing a BSE from Duke Engineering in 1975, Shoemaker went on to a position at Avondale Shipyards, performing finite analysis of ship hulls. After several years of the work, he grew restless and was looking for a new challenge. He wrote to a former professor—Senol Utku—who had once urged him to consider graduate school.

Not only did Utku again encourage Shoemaker to embrace the challenge of further study, but he also invited him to return to Duke.

“Those words were life-changing,” said Shoemaker. Upon learning of Utku’s death, Shoemaker composed a letter addressed to his mentor, titled “The Letter I Should Have Sent 25 Years Ago.”

“You not only mentored me and guided me to obtain my PhD, but you were unbelievably warm to me and my family. My young children idolized you and to bring it full circle, you shared our pride when my oldest son Chris graduated from Duke in Civil Engineering just before you retired,” Shoemaker wrote in the letter. “That advanced Duke degree opened doors to me that would never have been attainable, and I am in the final years of a long and happy career that has spanned academia and the private sector. There is no doubt that you played an important role in making that all happen, and I will be forever grateful.”

Utku was a fellow in the American Society of Civil Engineers (ASCE), and the author of nine books—including co-authorship of the fourth edition of the classic Elementary Structural Analysis which has educated generations of structural engineers. Utku also published over 60 peer-reviewed journal articles.

Utku’s theories were inspired and motivated by thoughts of helpful and practical applications.

“I will always remember him saying that ‘natural events should not be natural disasters.’ He was very much aware of the power of earthquakes and the damage they can cause, especially in Turkey,” said John Dolbow, a professor of engineering at Duke and an expert in computational mechanics. "I think that saying summarized his approach to engineering—which was that we ought to look to deploy control strategies to keep the events that we cannot control from becoming catastrophic.”

"Help me build on thy high road
A bridge to serve the Common Good
To smooth the way and lift the load
A link of human brotherhood"
-Poet and bridge designer David B. Steinman, as quoted in a 1976 dissertation by Metwally H. Abou-Hamd, a Duke student of Senol Utku