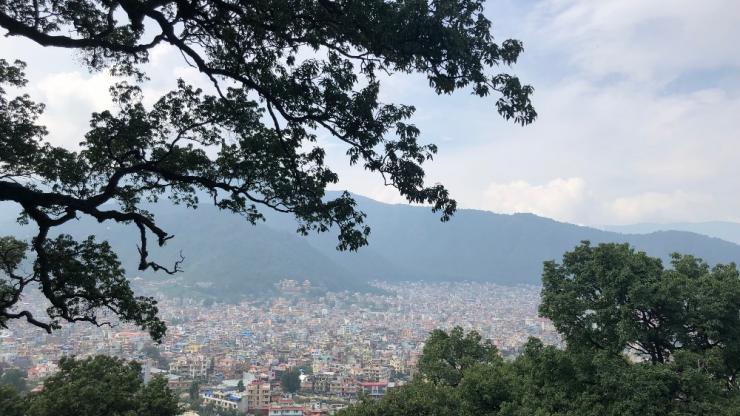 The first gift was being seated next to a Beloit College undergraduate from Kathmandu on the first leg of her trek from Illinois to Nepal. Lau was traveling to advance plans for a project supporting earthquake resiliency in Nepal. Her classmate and fellow NAE Grand Challenges Scholar Tenzin Yangkey, and civil and environmental engineering professor Henri Gavin would join her later, but for the time being she was flying solo. She was happy to have someone to talk to during the 17-hour flight, especially someone who had a personal stake in her project.

Lau’s second gift was having their conversation overheard by another passenger— a Notre Dame University PhD candidate studying behavioral responses to earthquakes, who introduced herself to Lau at baggage claim when the plane landed in Delhi.

The serendipity of meeting two student travelers who shared her interests was delightful, said Lau. But over the course of the summer, as the importance of understanding the human response to earthquake warnings would become clear, the chance encounter with the second student would help shape the future of the project.

In April and May of 2015, a series of powerful earthquakes with magnitudes of 7.8 and 7.3 devastated Nepal, taking nearly 9,000 lives and costing $7 billion in damages—nearly half the country’s GDP. Pratiksha Sharma ’18 was a first-year Duke electrical engineering student at the time. That summer she worked in her home country, alongside fellow Nepali students studying at Duke, on relief efforts to supply shelter to outlying regions before the summer monsoon season started.  By the time she began her second year at Duke she nurtured a bold ambition: to use her engineering knowledge to mitigate the disastrous effects of future earthquakes in Nepal.

By the time Sharma graduated, she had developed a microcontroller-based earthquake detection sensor and deployed it in two locations in Kathmandu, where it is working effectively to this day. It was an incredible beginning to her dream of establishing an earthquake warning system in Nepal—but as any engineer knows, the first design is very rarely the final product.

Gavin, who served as Sharma’s advisor, saw the potential to expand her project and strengthen its impact by working with partners in Nepal to advance sensor network technology and reliable AI. What’s more, he saw that students could take the helm. He recruited Lau, a civil and environmental engineering major who had already racked up significant international project management experience in Madagascar and China, for the project. Lau, in turn, reached out to Yangkey, who she knew to be interested in environmental issues facing the Himalayas. The team, which also included Flurina Boslough ME ’20, met weekly throughout the year, building connections with government agencies, NGOs, and their university partner, Tribhuvan University’s Institute of Engineering (IOE) in Lalitpur City, Nepal.

At IOE—which is recognized as the country’s top engineering school—dozens of students had put their names forward to be considered for the project, and three civil and electrical engineering faculty members selected 26 motivated and talented individuals to go forward. At the very first meeting bringing together Duke and IOE, the students sorted themselves into three technical teams: hardware and software development, seismic attenuation modeling, and hazard analysis.

They hit the ground running, and to say that Gavin was impressed by the teams’ engineering prowess would be an understatement. “Talent and potential is a gift that is uniformly spread around the globe, and is concentrated in places like IOE,” said Gavin.

Working together, the students from Duke and the IOE Pulchowk Campus improved the original sensor’s operating system to support an IoT server, making it programmable via the internet, while at the same time securing it from the threat of cyber hazards. They also extended the sensor’s original algorithm to make cooperation amongst multiple sensors possible. From the first three seconds of a quake’s pressure wave, or P-wave—the waves that precede the more damaging shear waves—they can invert to determine its origin and magnitude, and triangulate to determine the distance from the other sensors in the network.

With all earthquake early warning systems, the tolerance for false positives (vibrations that are from a source other than seismic events) is essentially zero. The team can achieve this through continued refinement of P-wave detection and seismic source inversion.

But there is another challenge—perhaps a greater one—to the future success of the project.

In July 2019, a magnitude 7.1 earthquake shook the Mojave Desert with quakes so strong that they were felt by residents of Los Angeles, 25 miles to the south. Half a million of those residents had downloaded a new app that was supposed to give advance warning of earthquakes, the LA Times reported. But, in this case, the app was silent.

Prevailing public perception was that the app had failed. Seismologists, however, stated that it worked exactly as it was supposed to; in Los Angeles, the quakes didn’t meet the threshold necessary to generate an alert.

The miscommunication illustrated a critical point—that efficiently and accurately gathering data solves only one part of the problem, and understanding how to best translate the data to be actionable and useful is quite another.

For the Duke-IOE project, this means incorporating social knowledge alongside technical expertise. “It is our highest priority going forward,” said Gavin. “We need to build, in an evidence-based way, the knowledge required to demonstrate that this is a safe and viable solution—including knowledge of human response. Of all the aspects involved, the social science aspect is probably the most challenging and certainly the most understudied.”

When the team decided that it was necessary to formally incorporate social sciences into their project, Lau knew exactly who to reach out to for advice on how to begin: Shana Scogin, the PhD student she’d met in the airport in Delhi, at the beginning of the summer. “She began asking us questions that we as engineers need to be thinking about, in terms of how earthquakes and warning systems are perceived socially,” said Lau.

To delve into the realm of social sciences more deeply, Yangkey and Lau will teach a “House Course” in the spring of 2020, which will broadly cover the human response to both natural and human-made disasters.

“The house course is primarily meant for facilitating discussions on understanding modern disaster through our lens of intersectional identities,” explained Yangkey. “We also hope to explore social sciences as part of disaster preparedness and response, which is one of the most important things for future project development, and one of the most challenging to get right.”

At the same time, Yangkey and Lau will continue to work on getting the sensor’s false-positive rates down to zero.

To demonstrate a commitment to the long-term vision of the project, Duke and IOE recently signed a Memorandum of Understanding that details objectives over the next several years.

“Through peer-to-peer co-development, students are more than full partners in this project—they’re leaders,” said Gavin. “They’re leading their world toward a more resilient future.”