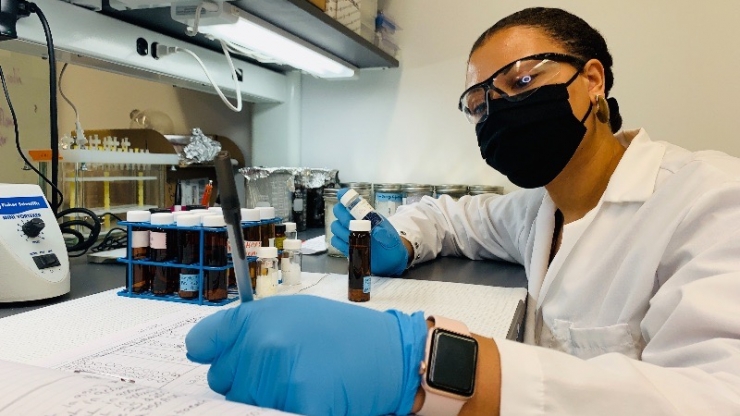 “The biggest concern is that you don’t know where that bottle of water has been before it ends up in your hand,” said Walker. “It could have been sitting in a warehouse or the back of a truck, in the heat—which speeds the plastic’s disintegration—for a long time. I worry about the chemicals and the microplastics that could be in there when you consume the water. And then we’re also polluting the environment with the empty bottle. It’s a double whammy.”

“The biggest concern is that you don’t know where that bottle of water has been before it ends up in your hand. It could have been sitting in a warehouse or the back of a truck, in the heat—which speeds the plastic’s disintegration—for a long time."

Walker, who earned an undergraduate degree in marine science from the University of California–Berkeley, is rising fifth-year PhD student in the lab of Duke environmental engineer Lee Ferguson, and she studies the fate of plastic components as they break down and disperse in the environment. Part of her dissertation work is conducted at the mesocosm in Duke Forest, where she doses a simulated wetland ecosystem with microplastics to discover where they will eventually settle out. The water is full of the UV inhibitors that are added to plastic during the manufacturing process, said Walker, and the fish see the tiny bits of plastic as tasty prey, gobbling it down.

According to Walker, the environment inside an animal’s stomach can cause some harmful chemicals to be released at higher concentrations than they would in seawater. Walker has used non-target mass spectrometry, a form of chemical forensic science, to find that high concentrations of surfactants, lubricants and biocides leach from plastic items commonly found on beaches, including balloons, trash bags, Styrofoam cups, and fishing line.

We know that some of these plastic additives can affect your health—like BPA, which can bind to estrogen receptors and influence bodily processes. The effects of hundreds of other plastic additives are still unknown. But Walker acknowledges the difficulty in making recommendations for alternatives—like reverse osmotic filtration systems in place of plastic bottles—when they are often expensive. “’Environmentally friendly’ is not cost-effective,” said Walker. “It’s elitist, in a way, and it’s hard to encourage people to do good things when they’re not accessible.”

Walker launched a Youtube channel where she delves into the topics she studies, including water quality and chemical exposure from consumer products. But the videos are not geared toward other scientists—instead, they’re produced for a broad range of ages and knowledge levels. “I feel like we researchers have been living in a little bit of a bubble when we go into our labs and interact mostly with other researchers,” she said. “The public needs to understand what environmental engineering is, what a researcher does, what our findings are and what the implications are for daily life.”

She also talks a lot about higher education, paying special attention to people in their teens who might be thinking about college. (In recent years she also served as a mentor for SENSOR Saturday Academy, which helps underrepresented Durham middle school students explore STEM through real-life water quality projects.)

“For me personally, it’s important to communicate this work in a public-facing way because I didn’t see many black female environmental engineers—I’ve only met two or three, ever,” said Walker. “I wanted to be that change and inspire others to think about this field.”