Heather Stapleton's research into PFAS, a group of potentially harmful chemicals, began in her own kitchen. Stapleton knew that her fellow scientists were beginning to look more closely at the compounds – often called "forever chemicals" because of to their persistence in the environment. So she decided to test her home's drinking water for their presence.

The high PFAS levels she found in her own tap surprised her.

"This raised two questions in my mind," Stapleton said. "Where was it coming from? And how well did the water filter in my home remove these compounds?" 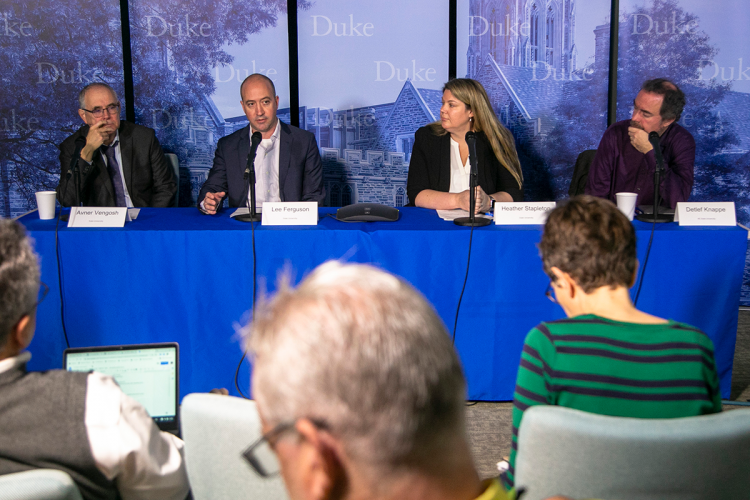 Stapleton, the Dan and Bunny Gabel Associate Professor of Environmental Health at Duke's Nicholas School of the Environment, now studies the presence of PFAS in drinking water in several N.C. communities. On Feb. 5, she joined Duke colleagues Avner Vengosh and Lee Ferguson and Detlef Knappe of N.C. State University at a media briefing on emerging contaminants that threaten North Carolina drinking water quality. These researchers are working to help North Carolinians better understand and respond to those potential threats.

As a group, the researchers study a range of compounds that pose potential drinking water hazards. At the briefing, Stapleton and Ferguson, an associate professor of civil and environmental engineering at the Nicholas School and the Pratt School of Engineering, outlined their work monitoring PFAS levels in water supplies. Vengosh, professor of earth and ocean sciences at the Nicholas School, described threats posed by coal ash and naturally occurring hexavalent chromium. And Knappe, the S. James Ellen Distinguished Professor of Civil, Construction and Environmental Engineering at N.C. State, discussed a contaminant known as 1,4-Dioxane.

PFAS, a group of man-made industrial chemicals, have drawn attention because some types have been linked to health problems, including cancer, thyroid disorder and immune system disorders. Other types of PFAS have been little studied, and scientists are still determining their potential health effects.

In response to concerns about the chemicals, the state of North Carolina in 2018 created an ambitious statewide testing network to monitor PFAS levels in N.C. drinking water. Lee Ferguson helps lead the state PFAS testing network, together with colleagues from N.C. State and UNC-Chapel Hill. The network represents a wide-ranging attempt to monitor the compounds' presence in drinking water supplies in 405 municipalities across the state. 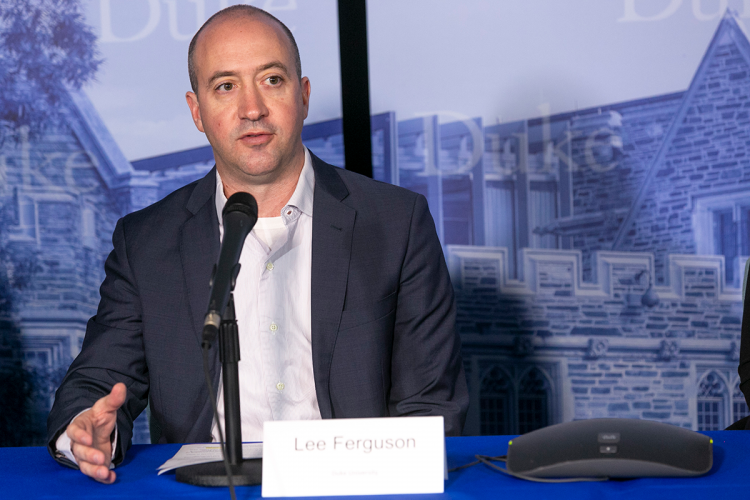 North Carolina's drinking water is at a higher risk for PFAS contamination because of the variety of industrial, military and other sites in the state, Ferguson said. While normal levels have been found in most communities, the tests have revealed high levels in some locations, including Brunswick County and the Orange County Water and Sewer Authority (OWASA).

Researchers have made a point of being transparent with their findings, sharing data with affected communities wherever high levels have been found, Ferguson said.

Some positive changes have already resulted. For instance, when researchers discovered high levels of PFAS in the water in Maysville, N.C., they alerted community leaders, and local authorities quickly took steps to switch to a different water source.

THE LASTING EFFECT OF COAL ASH

In some parts of North Carolina, coal ash, a residue left from burning coal for fuel, continues to threaten water supplies, Vengosh said. Vengosh has found high levels of coal ash solids in locations such as Sutton Lake, a former coal-ash disposal site in southeastern N.C.

In a recent settlement with the North Carolina Department of Environmental Quality, Duke Energy agreed to excavate nearly 80 million tons of coal ash from unlined ponds and move it to lined landfills. The settlement represents an important breakthrough in N.C. environmental policy, Vengosh said. But he warned that the agreement does not cover unmonitored coal ash spills or the use of coal ash as a soil fill.

"I expect that we will face the environmental legacy of coal ash for decades to come," he said.

Vengosh also described his research on hexavalent chromium, a carcinogen that occurs naturally in some N.C. soils. Vengosh's study found the compound in half of wells that were tested in central N.C.

"I expect that we will face the environmental legacy of coal ash for decades to come."
-- Avner Vengosh

Since private well owners have no obligation to test their water, many don't know what's in it, Vengosh said. And while testing water for hexavalent chromium can be expensive, there is a less costly alternative. "Our research shows that testing for total chromium can be a good proxy for detecting the presence of hexavalent chromium, and those tests are cheaper and more common," he said.

Another contaminant, called 1,4-Dioxane, has been found in high concentrations in locations such as the Cape Fear watershed and Pittsboro, said Detlef Knappe of N.C. State. The compound, classified by the EPA as a likely carcinogen, is often a byproduct of manufacturing processes, and can end up in a manufacturing facility's wastewater, Knappe said.

Where water quality is concerned, Knappe added, there's a risk of focusing too narrowly on one potential contaminant at a time – and missing others.

"Maybe we'll develop a new framework in the future, (in which) we don't regulate one compound at a time, but instead start to think more broadly," he said.

Meanwhile, the list of compounds that may affect water quality continues to grow, Ferguson added. That makes this the wrong time to lessen protections on water quality, he said. 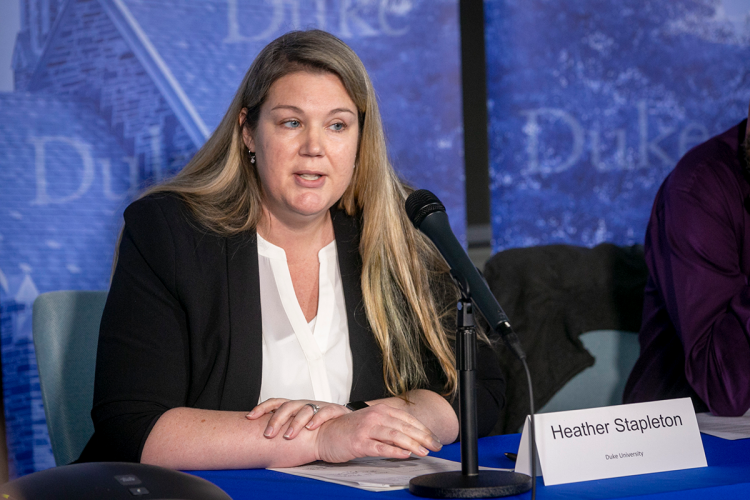 ABOUT THAT HOME WATER FILTER

Yet as scientists race to track down and measure various potential water contaminants and their effects, what are ordinary citizens to do? One possible response is to invest in a home water filter, as Heather Stapleton did.

In a new study, however, Stapleton and her colleagues, including Knappe and Ferguson, find that while using a filter does help, not all filters perform equally well in removing PFAS. Reverse osmosis filters and dual-stage filters did the best job. Other filters, including whole-house and tabletop filters, ranged widely in how effective they were in removing the compounds.

For those who do use a home water filter, Stapleton has a piece of general advice: Change it frequently. When filters weren't changed often enough, the researchers found, they became saturated and may actually make drinking water quality worse.

"How often you change filters really matters," she said.