When a 'Pros and Cons' List Won't Cut It

From food choices to land management, Duke engineers wrestle with the complexities of modeling risk 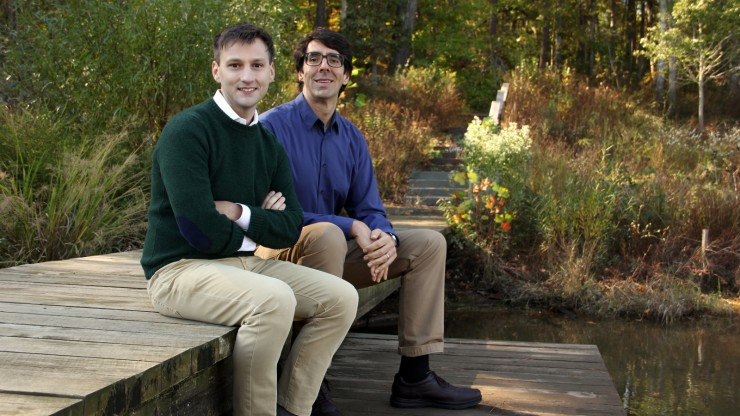 Now imagine that mercury levels in the fish may increase as a result of industrial development. The community should stop eating the fish, right?

But what if the community is located in the remote northern part of North America, and most affordable available alternatives are highly processed or pre-packaged empty-calorie foods?

Trying to weigh one risk against the other embodies the classic “apples and oranges” problem. You’d need some kind of tool that could reconcile the two different risks—increased mercury exposure versus reduced nutritional sufficiency—in terms of a common unit, so you could directly compare possible impacts and outcomes.

Enter Ryan Calder, a postdoctoral researcher in the lab of Duke civil and environmental engineering professor Mark Borsuk, who works to synthesize complex questions like these into quantitative models that support individual and policy decisions.

The above problem is a real one, which Calder worked on while completing his doctoral degree at Harvard in the lab of Elsie Sunderland, a biogeochemist. In Labrador, Canada, an Inuit community lives downstream of a recently completed hydropower facility called Muskrat Falls. While scientists have known for decades that flooding hydroelectric reservoirs accelerates the production of neurotoxic methylmercury, they have disagreed strongly about the implications for human health and the effectiveness of risk mitigation decisions.

In the case of Muskrat Falls, these disagreements were compounded by unknowns about the physical system—there was very little data for impacts on downstream estuaries, such as the one that serves as the traditional hunting and fishing territory for indigenous Inuit. When the facility was in its planning stages, the developer claimed that there would be no impacts at all on the downstream environment. That raised a red flag for indigenous communities and scientists alike.

“Flooding for hydropower accelerates methylmercury production, so we were sure it wasn’t zero risk,” said Calder, who hails from Quebec. But the parties couldn’t agree on how big the risks actually were, or the best way the protect the health of the community. “Environmental scientists see what’s happening to the fish and suggest food advisories. But public health professionals and nutritionists have been more nuanced—if you say ‘don’t eat the fish,’ what substitutions might they make, and what risks do those choices pose?”

Calder’s work created a tool for decision-makers to anticipate methylmercury impacts associated with hydroelectric development, benefits of risk mitigation strategies and the tradeoffs of food consumption advisories. This work suggested that, for people who rely on traditional foods for nourishment, the risks of reducing their intake of local foods exceeded the risks of increased methylmercury. “On the one hand, it is important to understand that any increase in methylmercury exposures will increase risks—that is a problem that needs to be addressed and not ignored,” said Calder. “On the other hand, it is important not to adopt a policy response that will create even bigger risks.” (Though neither outcome was desirable, the Muskrat Falls project proceeded—but that’s another story entirely.

These practical decision-making challenges can be incredibly complex because of the disparate points of view that must be accounted for—not just in the political sphere, but in the scientific one as well. Disagreements and disputes between stakeholders that cross traditional disciplines are what drives much of Calder’s work. He uses tools from risk analysis to structure much of his work, where risk is classically defined as hazard multiplied by the probability of occurrence. “But when everything that you’re multiplying is a whole world of scientific controversy, it gets a little complicated to produce a globally reliable and rigorous assessment that won’t be destroyed in peer review,” said Calder.

But the results matter, he added. That’s why he is dedicated to the work, and why he was recruited by Borsuk’s lab at Duke, called the Modeling Environmental Risks and Decisions Group, or MERDG.

MERDG takes the complex problems faced by policymakers, individuals and other stakeholders—which are often posed in terms much more general and subject to much greater uncertainties than what is anticipated by existing scientific literature—and strives to provide credible quantitative estimations that can help them make decisions.

“There are a lot of modeling tools that will describe environments under very specific assumptions. Reality is a lot messier,” said Calder. “There are a lot of social factors, and the environment is dynamic and unbounded. We take these nebulous systems and structure them into quantitative frameworks that can generate recommendations for action.”

Maximizing the Value of Ecosystem Services

For example, military bases across the U.S., though located alongside urban or suburban communities, are generally huge and sparsely developed. These bases can provide valuable “ecosystem services” like habitat for plants and wildlife, recreational opportunities for nearby occupants, and natural resources like timber. How is that value best preserved and maximized—through active management, or by leaving the ecosystem to its own devices? How much are these services worth to the local community, compared to whatever would occupy the land if the base weren’t there?

In collaboration with colleagues at the Nicholas Institute for Environmental Policy Solutions, Portland State University and UCLA, MERDG developed a modeling platform called MoTIVES (Model-based Tracking and Integrated Valuation of Ecosystem Services) that ascribes monetary value to ecosystem services and compares how they might gain or lose value under different management strategies and land-use scenarios.

In its pilot project, supported by the US Department of Defense’s Strategic Environmental Research and Development Program (SERDP), the group considered Florida’s Eglin Air Force Base, which supports the largest mature longleaf pine forest in the world and provides habitat for eight federally listed threatened or endangered species. Their simulations showed that current management practices at Eglin, which include prescribed burning and some timber harvesting, generate higher net benefits than both a “hands-off” scenario and a scenario in which the base didn’t exist at all. This valuation calculated that current management activities may generate roughly $90.5 million more per year in ecosystem services for the local community than an alternative scenario in which the base were closed and developed similarly to adjacent land—powerful information for decision-making about land use in the United States, where public investments result in benefits that are often diffuse and hard to quantify.

Now that the methodology and proof of concept for Eglin have been published, the group hopes to obtain additional funding from SERDP to apply it more broadly.

“This project is one of several being pursued by MERDG,” said Borsuk, “that seek to convert scientists’ evolving knowledge and good faith estimates of risk and uncertainty, from being excuses for policy inaction into opportunities to better articulate the value of specific activities that can be taken to reduce risk. This perspective is needed on issues as diverse as climate change, biotechnology and artificial intelligence. In each case, there are concrete actions that could be taken now that both provide immediate benefit and improve our understanding of what might be required in the future.”

With professor of law and public policy Jonathan Wiener, Borsuk co-directs Duke’s new Center on Risk, which focuses on tradeoffs like the ones characterized by Muskrat Falls and Eglin Air Force base. MERDG is an active participant in The Bridge Collaborative, a partnership between Duke, the International Food Policy Research Institute (IFPRI) and PATH, while Calder is also a member of the North Carolina chapter of the Scholars Strategy Network. These partnerships play a key role in maintaining the impactfulness and responsiveness of the MERDG research agenda.