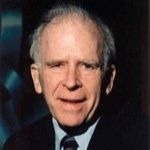 Since 1989, the Robert J. Melosh Medal Competition has provided a forum for young engineers and researchers to present their work to and interact with leaders in the field of computational mechanics.

The award honors Prof. Melosh—a pioneering researcher in finite element methods and former chair of Civil & Environmental Engineering at Duke. The Melosh Medal was established in view of his body of work, and aims to reflect his dedication to the education of engineers.

The names of winners are inscribed on a plaque displayed in Hudson Hall.

The hosts are Professor Guglielmo Scovazzi and Professor Johann Guilleminot of the Duke Department of Civil & Environmental Engineering.

The winner will receive the Robert J. Melosh Plaque, Medal and a $500 prize.

Finalists will be given the opportunity to prepare a full-length manuscript for inclusion in the journal Finite Elements in Analysis and Design.

Abstracts are then reviewed by a panel of distinguished researchers in computational mechanics.

The top five papers are selected as finalists, and their student authors are invited to participate in a symposium at Duke.

Answer our Call for Papers: