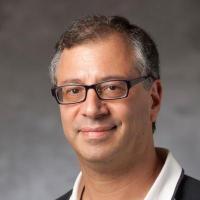 Gabriel G. Katul received his B.E. degree in 1988 at the American University of Beirut (Beirut, Lebanon), his M.S. degree in 1990 at Oregon State University (Corvallis, OR) and his Ph.D degree in 1993 at the University of California in Davis (Davis, CA).  He is currently the Theodore S. Coile Professor of Hydrology and Micrometeorology at the Nicholas School of the Environment and the Department of Civil and Environmental Engineering at Duke University (Durham, NC).   He was a visiting fellow at University of Virginia (USA) in 1997, the Commonwealth Science and Industrial Research Organization (Australia) in 2002, the University of Helsinki (Finland) in 2009,  the FulBright-Italy Distinguished Fellow at Politecnico di Torino (Italy) in 2010, the École polytechnique fédérale de Lausanne (Switzerland) in 2013,  Nagoya University (Japan) in 2014, University of Helsinki (Finland) in 2017, the Karlsruher Institute for Technology (Germany) in 2017, and Princeton University (USA) in 2020. He received several honorary awards, including an honorary certificate by La Seccion de Agrofisica de la Sociedad Cubana de Fisica in Habana (in 1998), the Macelwane medal and became thereafter a fellow of the American Geophysical Union (in 2002), editor’s citation for excellence in refereeing from the American Geophysical Union (in 2008), the Hydrologic Science Award from the American Geophysical Union (in 2012), the John Dalton medal from the European Geosciences Union (in 2018), and the Outstanding Achievements in Biometeorology Award from the American Meteorological Society (in 2021).  He served as the Secretary General for the Hydrologic Science Section at the American Geophysical Union (2006-2008).  Research in Katul's lab focuses on micro-meteorology and near-surface hydrology with emphasis on heat, momentum, carbon dioxide, water vapor, ozone, particulate matter (including aerosols, pollen, and seeds) and water transport in the soil-plant-atmosphere system as well as their implications to a plethora of hydrological, ecological, atmospheric and climate change related problems.